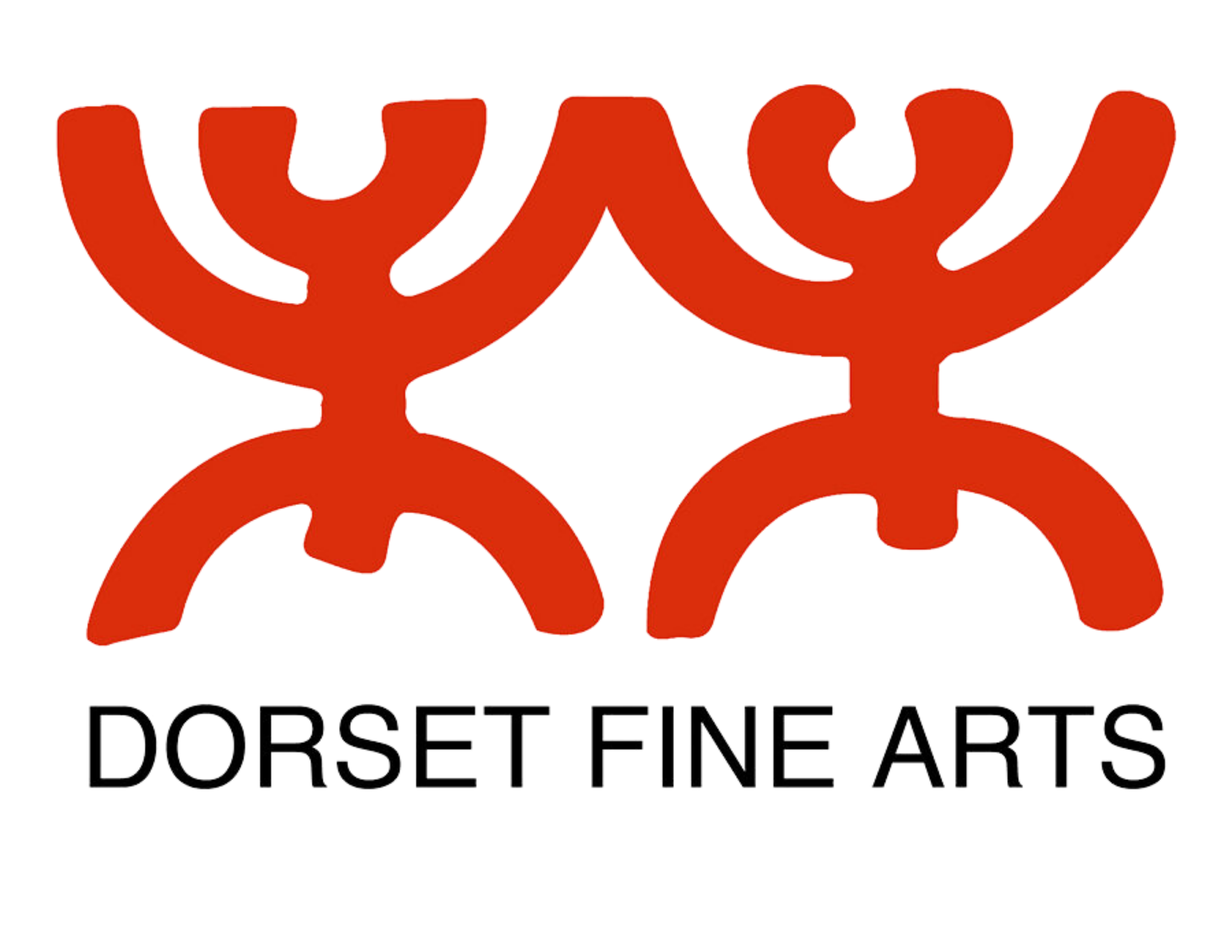 In partnership with Dorset Fine Arts, find our collection of limited edition prints by Inuit artists from Kinngait Studios on Dorset Island, Nunavut.

Established in 1959, West Baffin Eskimo Cooperative has enjoyed an international reputation for the exquisite prints, drawings and carvings created by its Inuit artist members. In addition to operation of the Kinngait Studios at the Kenojuak Cultural Centre in Kinngait, the cooperative maintains a Toronto marketing division office, Dorset Fine Arts, which is responsible for interfacing with galleries, museums, cultural professionals, Inuit art enthusiasts and the art market globally. The role of West Baffin Eskimo Cooperative has significantly expanded to include communications, promotion, advocacy, government relations and special projects as related to the Inuit art of Kinngait. Governed by an all-Inuit Board of Directors, the organization also maintains a local retail grocery/hardware store, a restaurant, rental properties and various utility contracts. As a community owned organization, practically all Kinngait adults are shareholders, profits are distributed back to the community in the form of annual dividends. 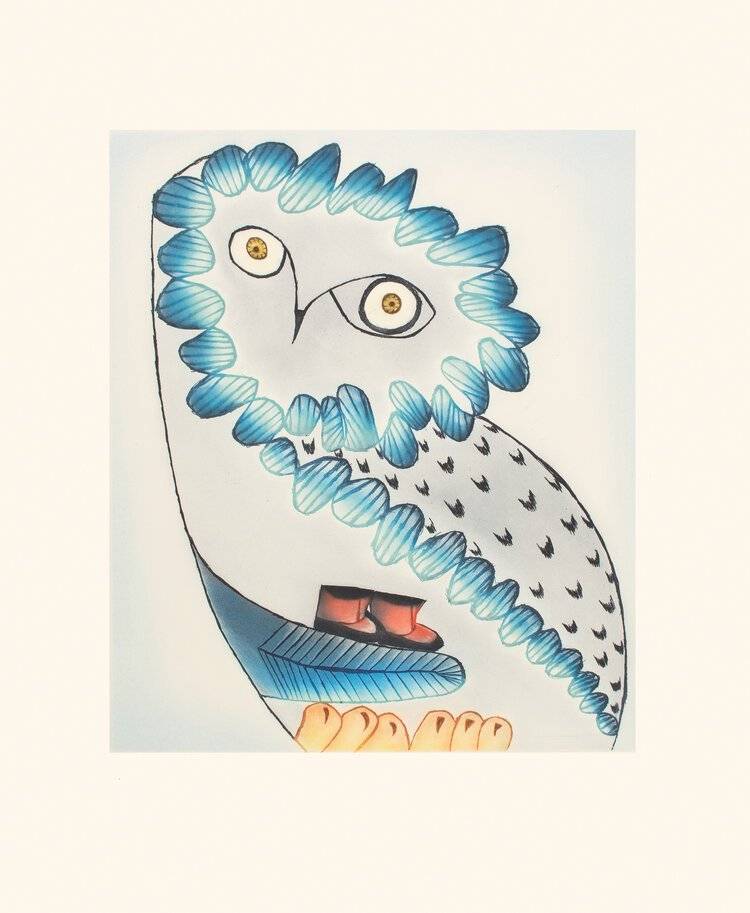 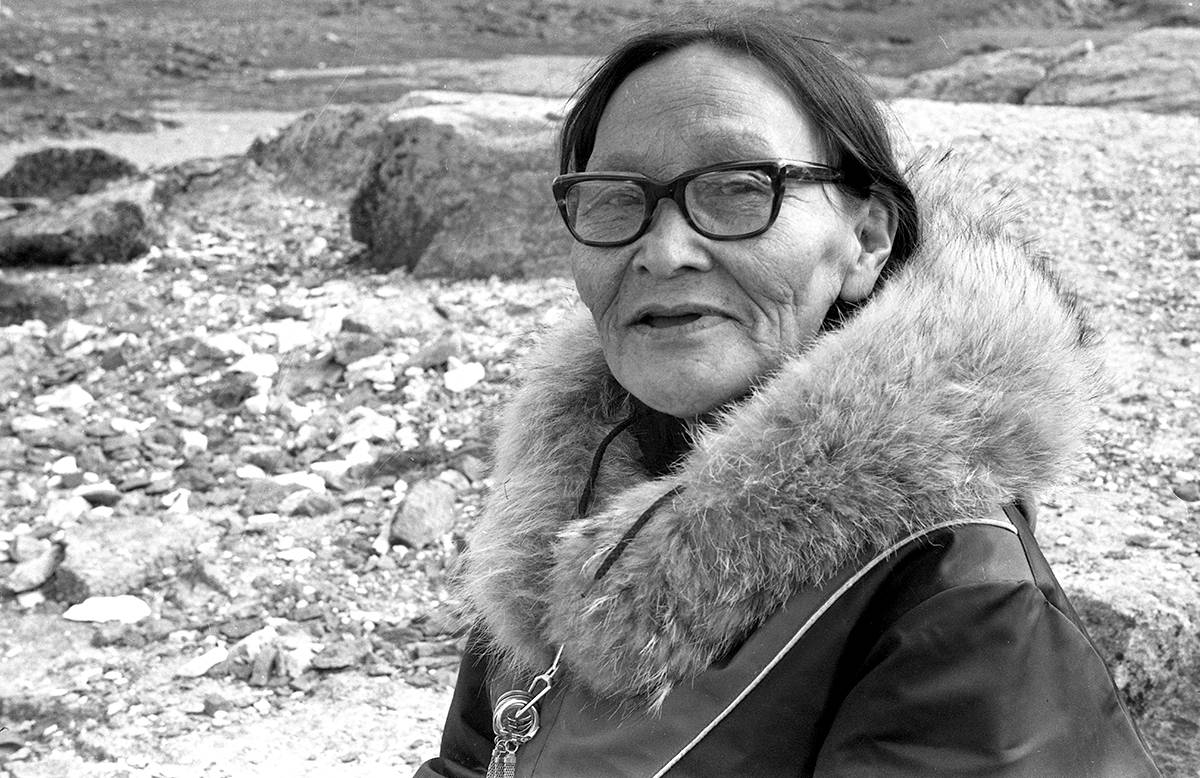 Lucy was a prolific Inuit artist from Cape Dorset, Nunavut Territory. She is known for illustrations of her favourite theme, birds, depicted singularly or in groups, in various situations and relationships. She also illustrated stories inspired by her experience of the Inuit traditional way of life. In her compositions, movement and stability are often ambiguously justaposed. 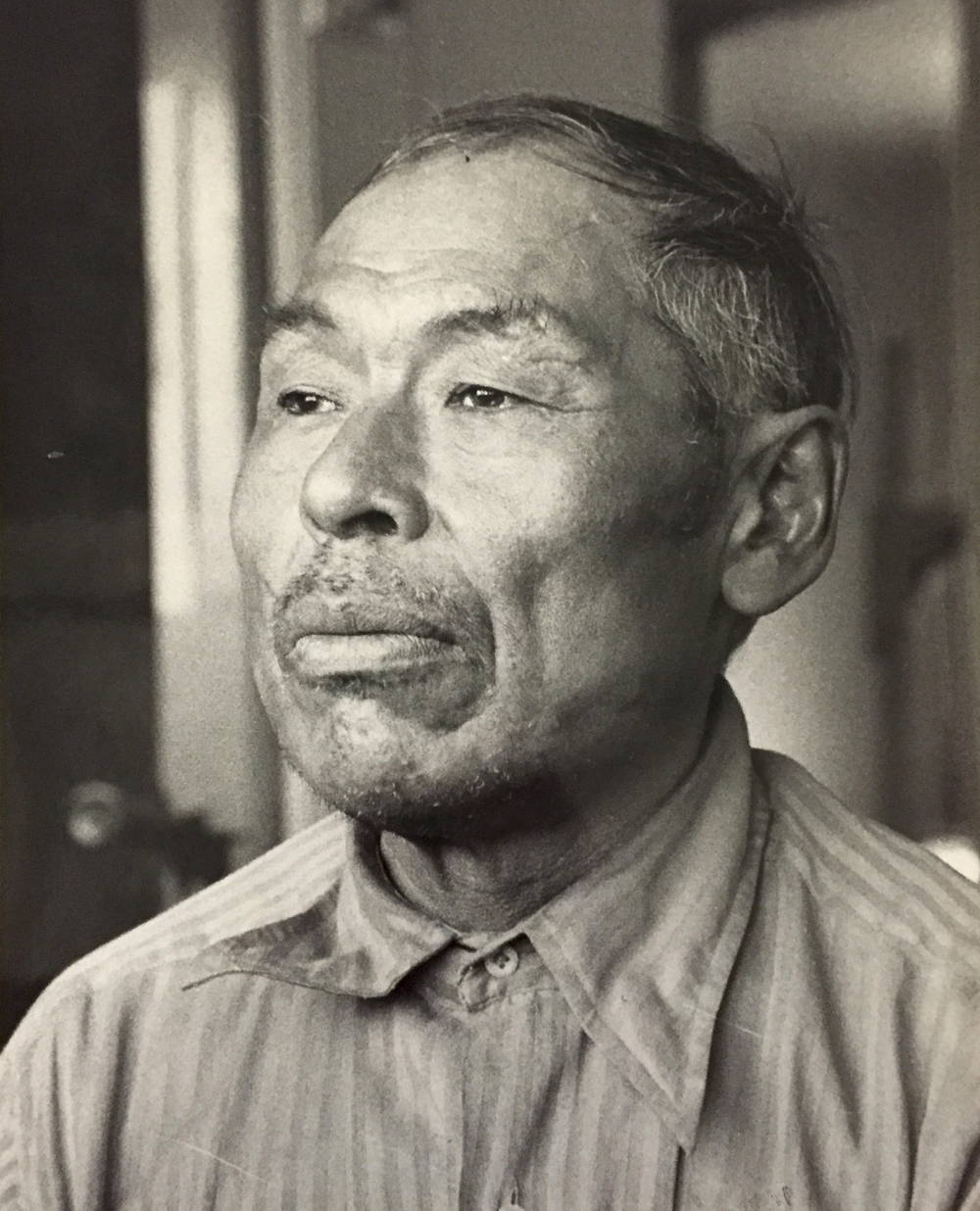 “Pudlo’s works over the years demonstrate his keen visual sense, his versatility and innovativeness in subject matter and technique, tempered by his sense of humour --- his knowledge of traditional life on the land and his acknowledgment of the changing times…Pudlo’s thinking/drawing process is a truly creative approach, done both consciously and unconsciously.

In the 1978 Cape Dorset print catalogue (p. 67) Pudlo talks about his drawing: “At times when I draw, I am happy, but sometimes it is very hard. I have been drawing a long time now. I only draw what I think, but sometimes I think the pencil has a brain too.” 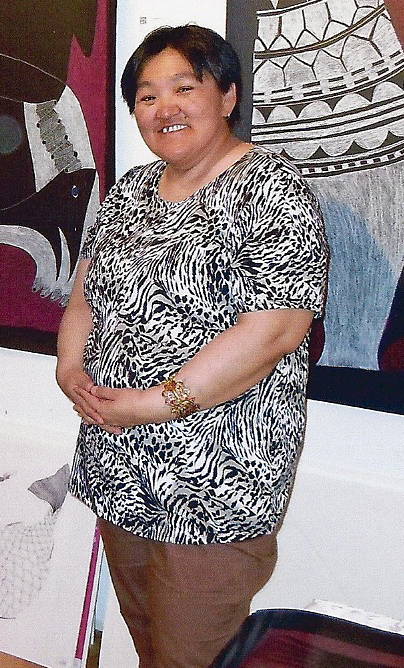 Ningiukulu is one of the most versatile and intelligent graphic artists to emerge from the Kinngait Studios. Born May 27, 1963, Ningiukulu is the daughter of Joanasie Salomonie (deceased) and his wife Kanajuk. Her father, Joanasie, was a community leader and much loved in Cape Dorset for his sense of humour, mischief and compassion. In the fall of 2009, Ningiukulu ’s first children’s book was published by Groundwood Books (A Division of House of Anansi Press). Entitled Alego, it is an autobiographical story of a young girl named Alego who goes clamdigging with her grandmother for the first time and, along the way, discovers all of the wonders of the seashore. The book was short-listed for the Governor General’s Literary Award for children’s illustration.

Since her first prints appeared in the collection in 2004, Ningiukulu has been one of Kinngait’s studio’s most celebrated artists. She has a comprehensive knowledge of Inuit legends and a fine sense of design and composition. These elements that have made many of her prints highly sought after by collectors. Ningiukulu has had numerous solo shows of her bold and resplendent drawings and some of her work has been featured in exhibitions in major public galleries and museums. 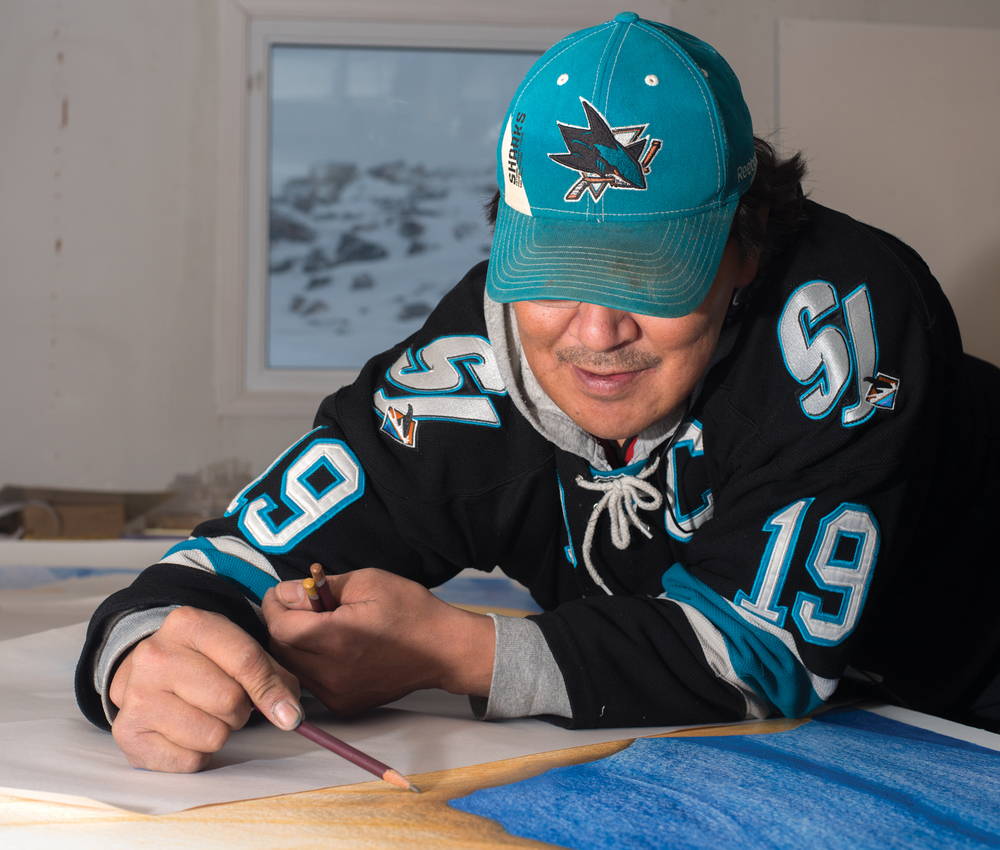 I am a hunter and I know the land and animals of the north. I am particularly inspired by the bowhead whale, because nobody really knows much about them. My inspiration to be an artist comes from my aunt, Kenojuak Ashevak, because she is the oldest and the best. -Tim Pitsiulak

Born in Kimmirut (Lake Harbour) in 1967 to Napachie (deceased) and Timila Pitsiulak, Tim lived in Cape Dorset for several years and enjoyed working in the lithography studio with visiting arts advisor, Bill Ritchie. The land and its wildlife were initially the primary influences on Tim’s realist drawing style. He later focused on chronicling the everyday, drawing large format, meticulously detailed depictions of boats, heavy equipment and airplanes – the machinery of modern life in Cape Dorset.

Tim was a hunter and his respect for the natural world and its wildlife was fundamental to his artistic sensibility. Tim was particularly inspired by the whales that frequent the cold, Arctic waters - the beluga and the bowhead - because, as he said, nobody really knows much about them. The bowhead in particular is a majestic and mysterious creature and frequently he will embellish his drawings of these animals with ‘tattoos’ of ancient artifacts. 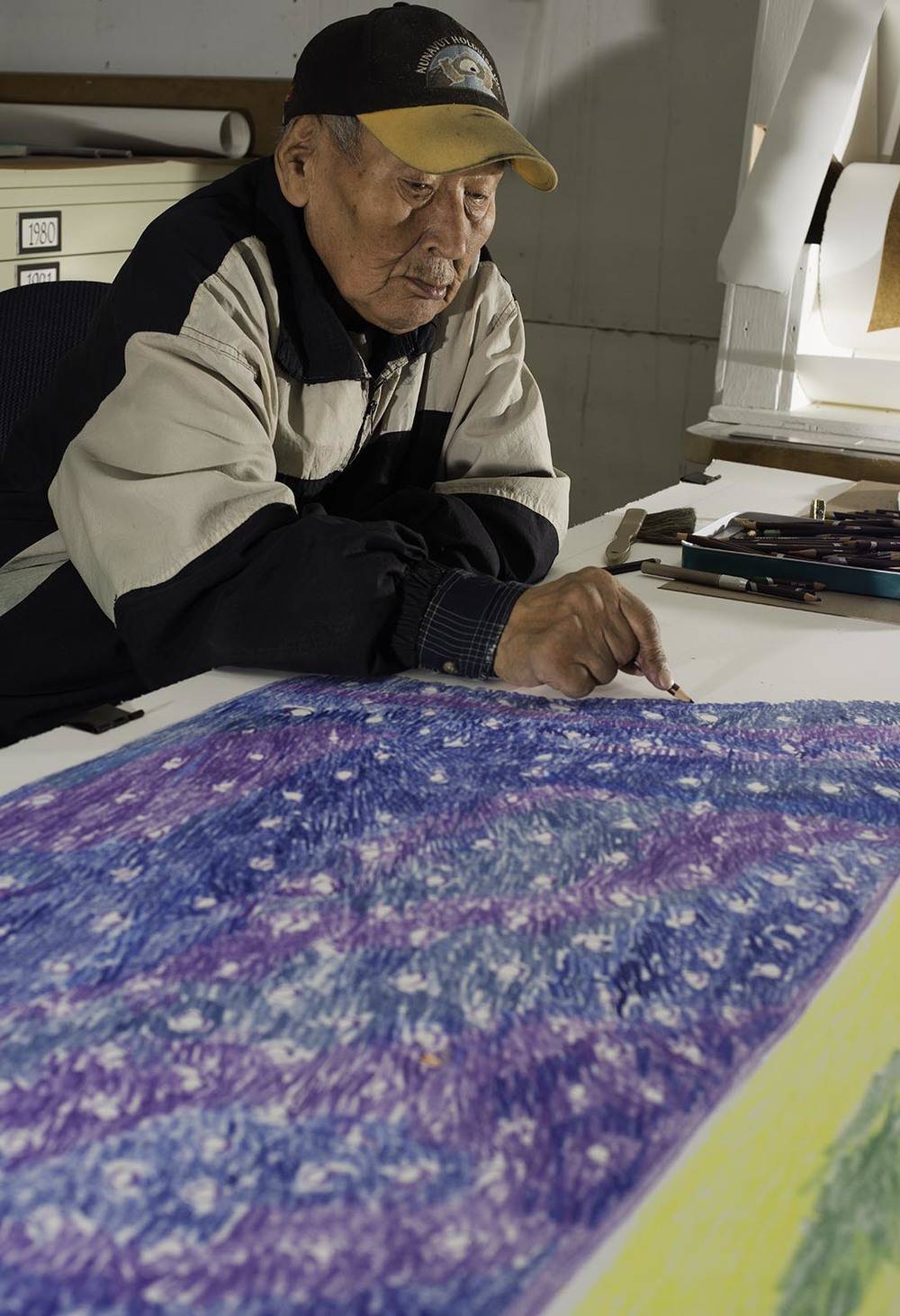 I enjoy doing colourful drawings, of people, animals, birds and especially the landscape. I used to enjoy hunting on the land, so that’s what I draw. I’ve done a few drawings of shamans, although I’ve never seen one. They are stories, true stories, told by my grandmother. - Ohotaq Mikkigak

Ohotaq was born in 1936 and lived in Cape Dorset with his wife Qaunak, who is a carver and traditional throat-singer. Ohotaq began drawing in the early years of the print program in Cape Dorset, and his print, Eskimo Fox Trapper, was released in 1961. He became less involved with drawing as the community grew, working full time instead for various community agencies. After his retirement from his job as caretaker of the Peter Pitseolak School in Cape Dorset, Ohotaq resumed his interest in drawing.

DFA was pleased to include three of his prints in the 40th anniversary collection released in 1999 and he was represent in every subsequent collection until his death in 2014. In the later years Ohotaq was a daily fixture at the table in the Kinngait Studios, working on drawings covering a wide range of themes and subjects, including an illustrated life history.

Ohotaq had his first solo exhibition of prints and drawings in 2010, and in 2012 a number of his large scale drawings were exhibited in a highly acclaimed show alongside Venerable Canadian artist Jack Bush at the Justina M Barnicke Gallery at the University of Toronto. 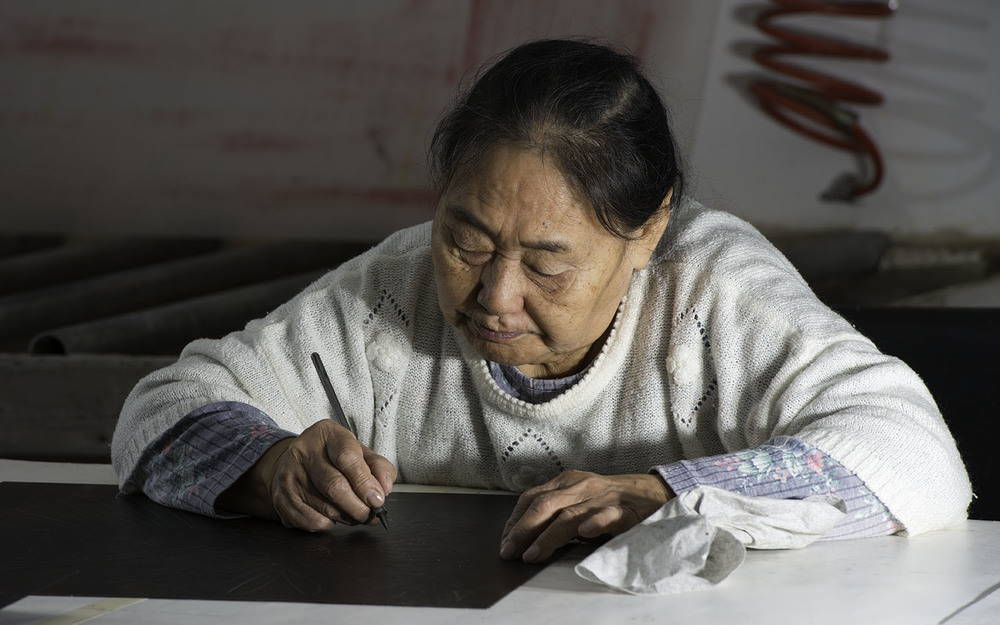 I like to draw birds, Sedna, seals and beluga whales. They are the most fun and I really enjoy seeing them in the wild. It’s always a good feeling when you see your art work published and know that people appreciate it. - Kakulu Saggiaktok

Kakulu was born in 1940 on board the Hudson’s Bay Company supply ship, Nascopie. Her family had travelled from south Baffin Island to hunt and trap in the northern regions of the island. Kakulu was a child when she moved back to the Cape Dorset area.

Kakulu began to draw in the early 1960’s when the West Baffin Co-operative established its printmaking studios. Many of her images explore the theme of transformation, with animals blending into other animals, humans becoming animals and vice versa. This is a predominant subject in traditional Inuit folklore and Kakulu Saggiaktok mythology, where the natural and supernatural worlds were mediated by the shaman. Kakulu’s work is always imaginative and often playful and charming and much of her inspiration comes from her childhood memories of living on the land.

Kakulu’s mother was Ikayukta (deceased), also one of the early contributors to the annual print collections from Cape Dorset. Kakulu was married to Saggiaktok (deceased), who was a printmaker in the stonecut studio for many years. 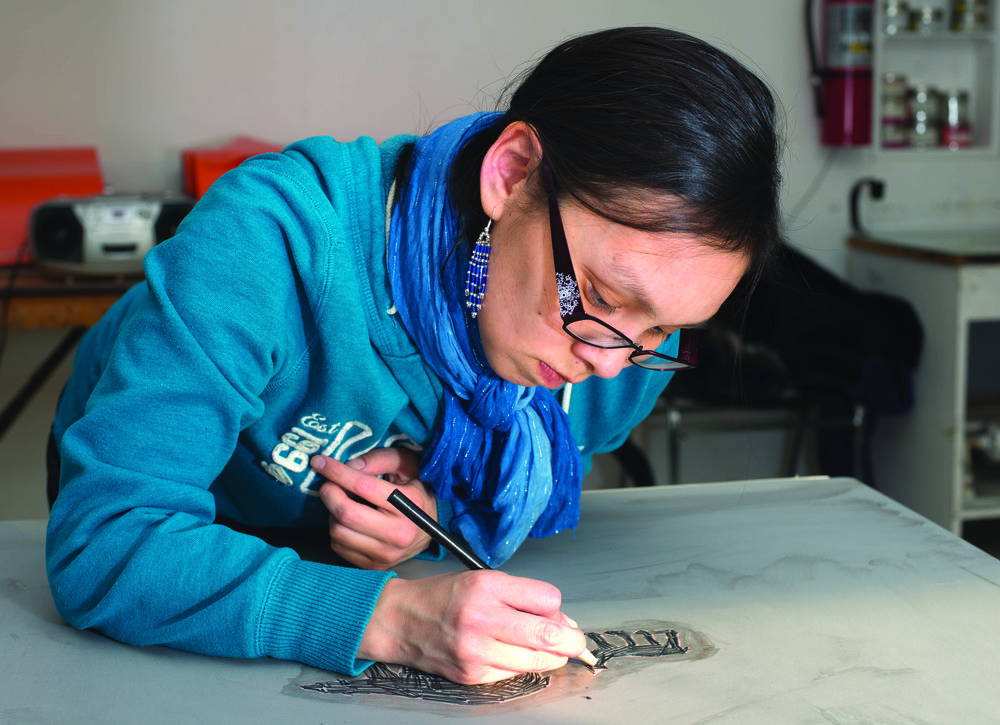 When I went down to the litho shop to sell my first drawing, I was very nervous wondering whether they would buy it or not. My first drawing was an image of my late grandfather’s (Latchaolassie) carving of a bird. I was so proud to get paid for that drawing and it inspired me to do more drawings.

Saimaiyu Akesuk was born on April 28, 1988 in Iqaluit but she has lived in Cape Dorset her whole life. Her parents are Lau Akesuk and Olayuk Akesuk who was one of the first Members of the Legislative Assembly in Nunavut. Saimaiyu was inspired to start drawing by Ningeokuluk Teevee while they were taking a class together at the Nunavut Teaching Education Program. Saimaiyu’s confident drawings of birds and bears are characterized by her bold and dynamic simplicity rendered with soft tenderness and quite often a touch of whimsy. 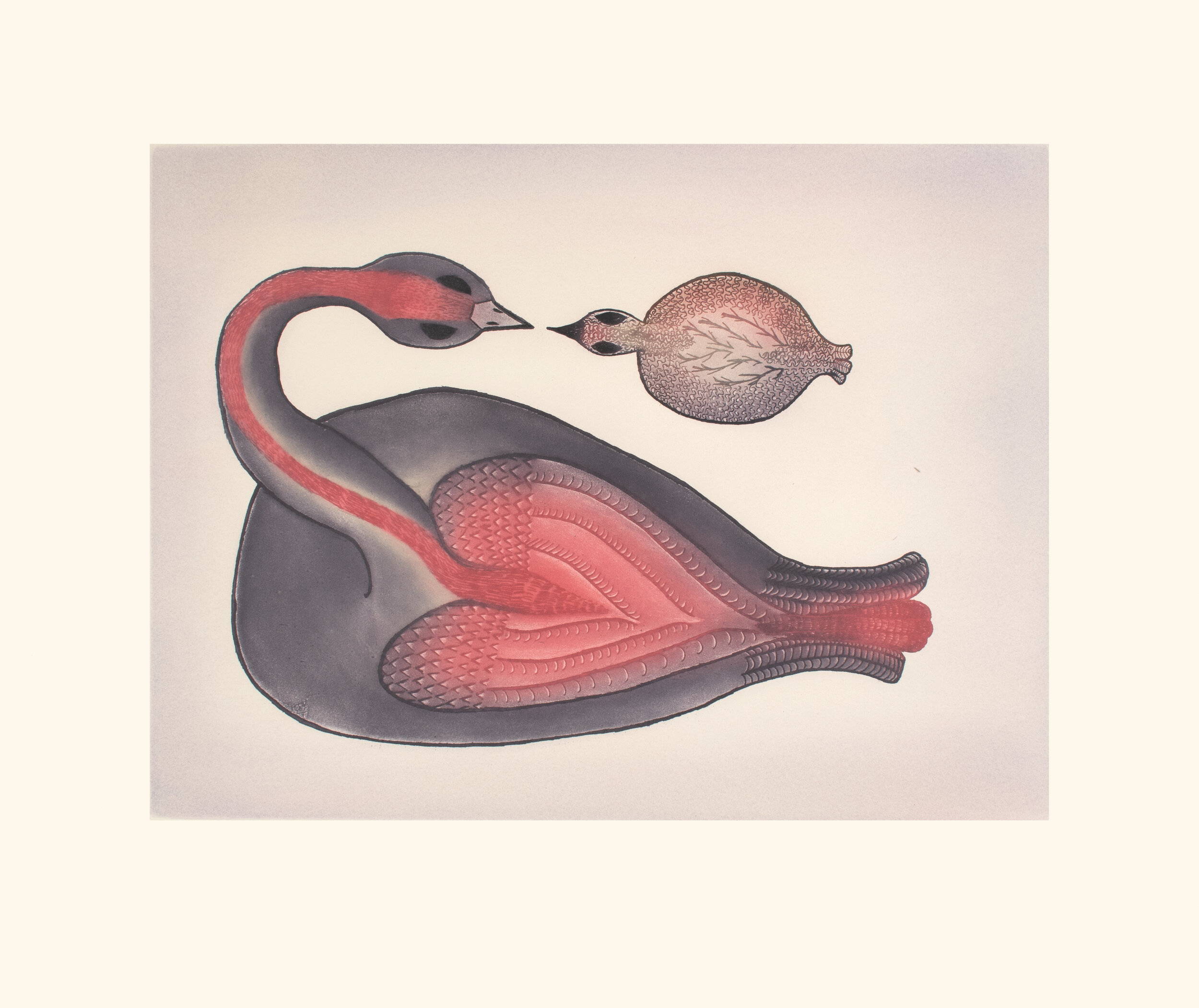 Pee Ashevak was adopted at an early age by Kenojuak and Johnnybou Ashevak. Although she lived with the family of Cape Dorset’s most renowned graphic artist it was Pee’s young son Arnaqu who inspired her to begin drawing seriously in 2016. Pee has done numerous drawings since then. Her depictions of wildlife and traditional camp scenes have a thoughtful and endearing quality. 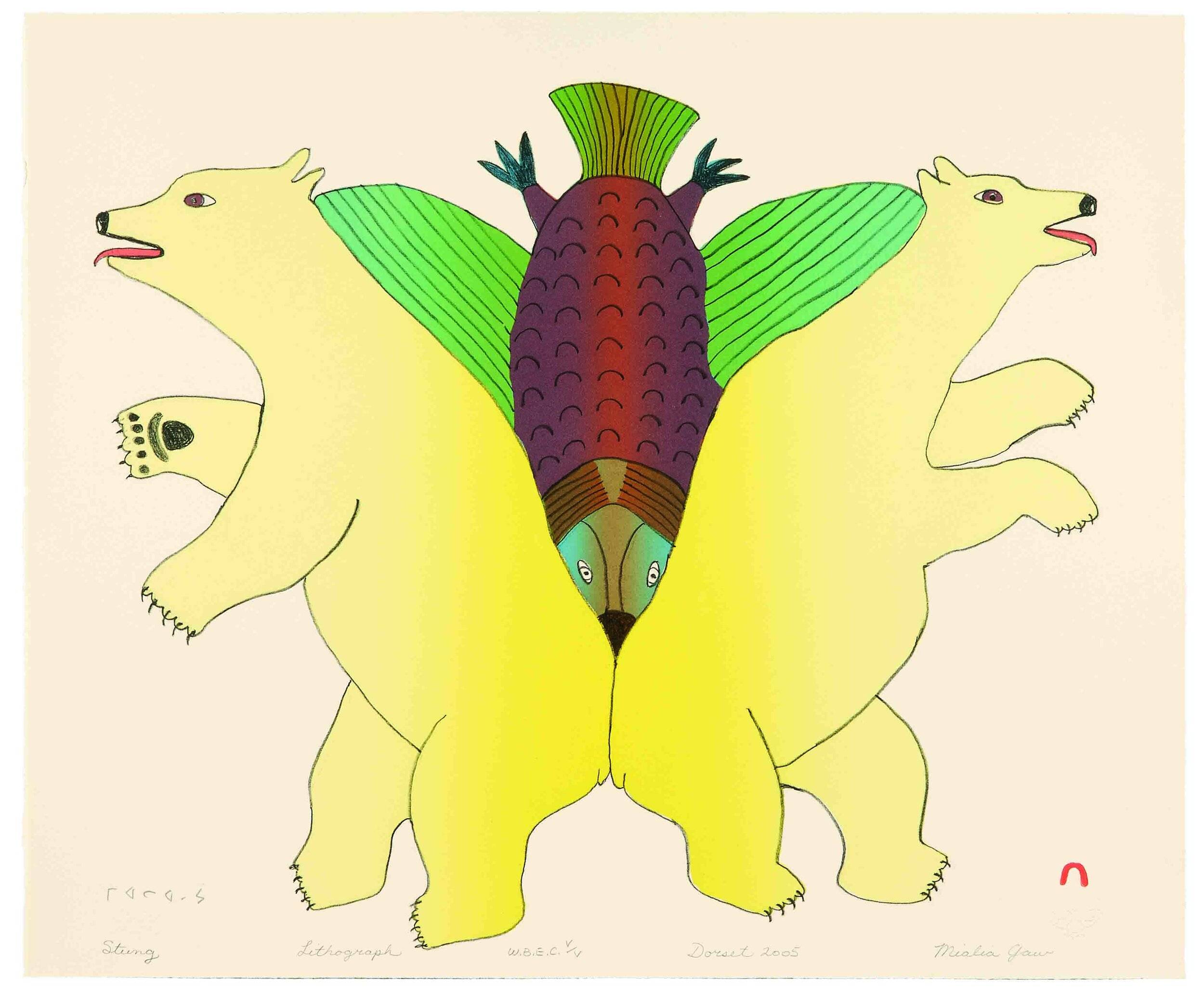 Mialia Jaw was a talented and prolific carver. She was married to Cape Dorset artist, Joe Jaw and they had five sons. Mialia strongly encouraged her children to learn the art of carving. Her sons, Pootoogook, Noah, Qiliqti, Salomonie and Kingwatsiak Jaw have all become carvers in Cape Dorset. 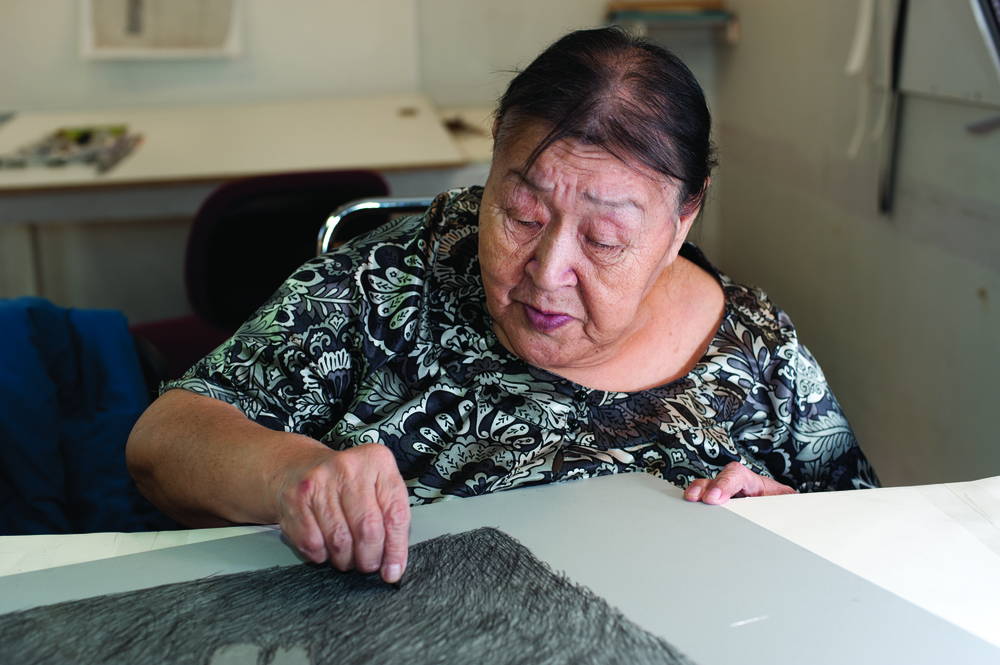 I enjoy drawing animals and I’m amazed at how they survive up here in the north. Without them, my family would never have survived. I also draw people camping because I am reminded of old times when we lived on the land. Those were good times.
- Papiara Tukiki

Papiara Tukiki has been a delightful mainstay of the annual DFA collection since her first prints were introduced in 2004. Papiara’s simple forms capture the essence of her subject - whether it be human or animal or some combination of the two, as in her Loon Spirit (2012 - 17) of 2012. Papiara has an innate sense of design. In 1977 she received an Award of Excellence for her original design in the “Things That Make us Beautiful” competition organized by the Department of Indian and Northern Development. Born on Christmas Day, 1942, Papiara is married to Qopie Tukiki, a long-time employee of the community’s Housing Association. They live in Cape Dorset. 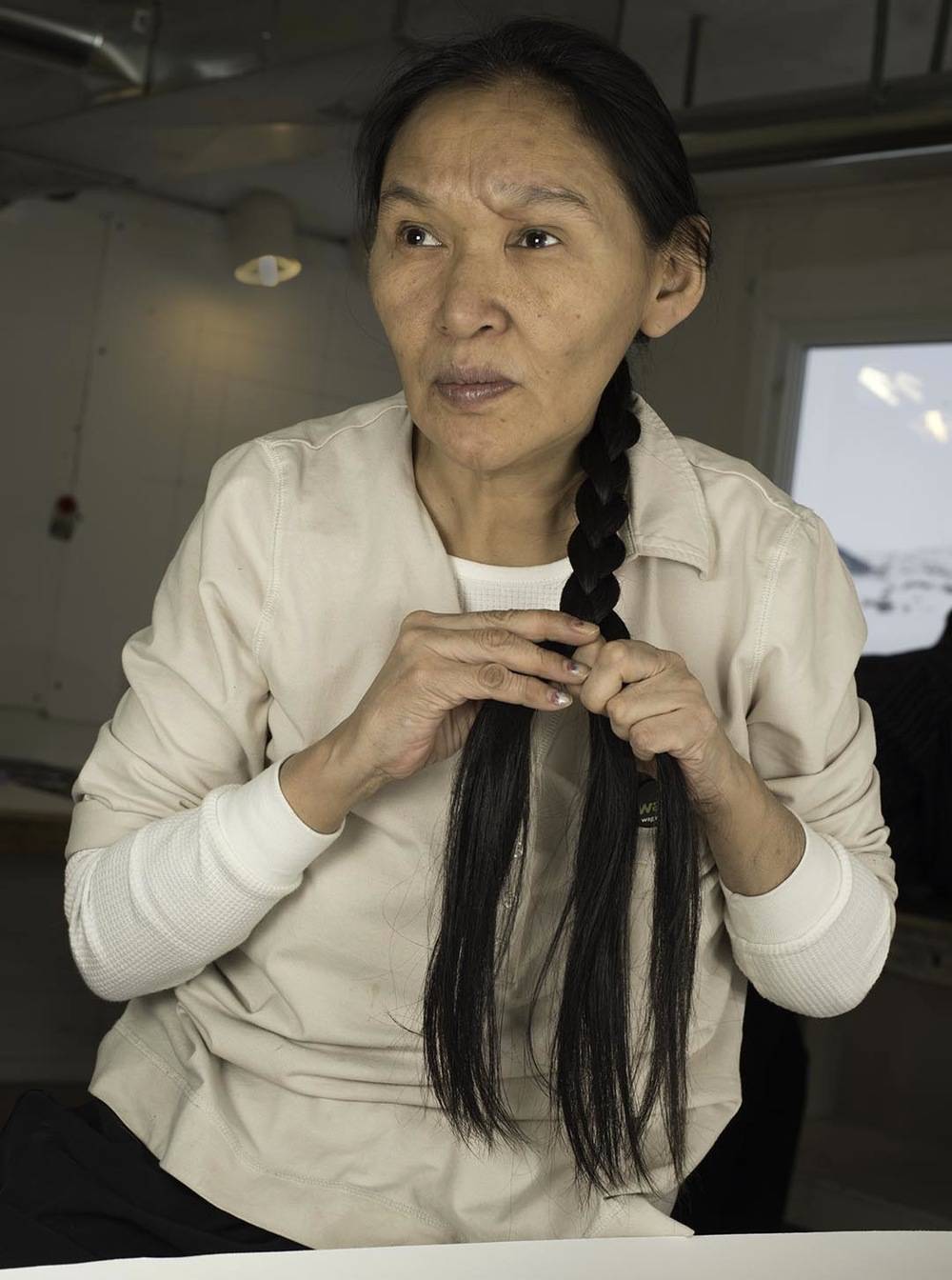 When I start to draw I remember things that I have experienced or seen. Although I do not attempt to recreate these images exactly, that is what might happen. Sometimes they come out more realistically but sometimes they turn out completely different. That is what happens when I draw. - Shuvinai Ashoona (From “Ghost Noise”; Produced and directed by Marcia Connolly)

Shuvinai was born in Cape Dorset in August, 1961. She is the daughter of Kiawak Ashoona and Sorosilutu, both well known for their contributions to the arts in Cape Dorset.

Shuvinai began drawing in 1996. She works with pen and ink, coloured pencils and oil sticks and her sensibility for the landscape around the community of Cape Dorset is particularly impressive. Her recent work is very personal and often meticulously detailed. Shuvinai’s work was first included in the Cape Dorset annual print collection in 1997 with two small dry-point etchings entitled Interior (97-33) and Settlement (97-34). Since then, she has become a committed and prolific graphic artist, working daily in the Kinngait Studios

Shuvinai’s work has attracted the attention of several notable private galleries as well as public institutions. She was featured along with her aunt, Napachie Pootoogook, and her grandmother, the late Pitseolak Ashoona, in the McMichael Canadian Collection’s 1999 exhibition entitled “Three Women, Three Generations”. More Recently she was profiled along with Qavavau Manumie of Cape Dorset and Nick Sikkuark of Gjoa Haven in the Spring 2008 issue of Border Crossings, a Winnipeg-based arts magazine.

In an unusual contemporary collaboration, Shuvinai recently worked with Saskatchewan-based artist, John Noestheden, on a "sky-mural" that was exhibited at the 2008 Basel Art Fair and was shown again at Toronto’s 2008 "Nuit Blanche". It later traveled to the 18th Biennale of Sydney in 2012 and in 2013 it was part of ‘Sakahans’ an exhibition of international Indigenous art at the National Gallery of Canada. In 2009 her work was presented alongside Toronto-based artist Shari Boyle at the Justina Barnicke Gallery at Hart House. Shuvinai is also the subject of a documentary art film, Ghost Noise, produced and directed by Marcia Connolly.

Shuvinai is slowly gaining more international attention and in 2013 she was included in the prestigious Phaudin publication, ‘Vitamin D2. New Perspectives in Drawing’. Shuvinai will be represented at SITElines 2014 Unsettled Landscapes in Sante Fe, New Mexico.